Mesdames et Messieurs, we would like to announce the  golden dawn of a new French Belle Epoque!

Parisian elegance its reasserting its Divine Right to global cultural expression; palatial opulence, the likes of which have not been seen since the reign of the Bourbon Kings, is enjoying a resurgence, not in Paris, but in the beating heart of Manhattan.

The perpetrator is Baccarat, the famous Parisian House of Crystal that chose to open the doors of its debut luxury hotel in the creative capital of the modern world. It’s sparking a French Renaissance.

The design of the Baccarat Hotel pays homage to the reign of the Sun King, but French style has been reconfigured and taken to new heights, at inestimable expense! This could only have happened in the melting pot of Manhattan. There is no hint of French frivolity here; no chintz, no pastels, or roccoco embellishment, no frills or ruffles. But crystal still reigns supreme! This luxury realm orbits around a galaxy of crystal chandeliers. The Baccarat Hotel  is the Palace of Versaille of the 21st century.

New York hasn’t seen this much glass since the Crystal Palace of 1853. Inspired by London’s 1851 Great Exhibition, the Crystal Palace, the largest building in the city at that time, was constructed on West 42nd Street at the northern periphery. That temple of transparency was a fleeting monument to nineteenth century art and industry in a brave and vital city looking forward to its future. But that dream was suddenly shattered .

Until now, French culture in New York  has had limited impact. In the late nineteenth century, ‘Little France’, around Washington Square, was home to a community of just twenty-four thousand French immigrants, with their little shops and bistros. Things could have been so different. Back in 1797, New York narrowly missed out on looking just like Paris. A French born surveyor and architect submitted an award winning plan for the city, which worked in harmony with the landscape, balancing structure and symmetry with the less organised elements that give European capitals their charm and character. How beautiful it could have been. But the plan was overlooked in favour of the grid system.

But non, je ne regrette rien! Because now on that grid sytem, the new Crystal Palace that is the Baccarat Hotel stands bang in the middle of Manhatten, just a pirouhette away from 5th Avenue, where the impressive French cultural institutions offer the best of French arts, literature and education.  Also on 5th Avenue, Bastille Day is celebrated every year, with can-can dances, Boules, patisserie from Laduree, crepes and macaroons galor and Joie de Vivre!

MoMa sits in the shadow of the Baccarat Bar Terrace, which effervesces with a cosmopolitan crowd,  sipping  custom handmade cocktails from the five thousand custom handmade crystal glasses. Even the tooth mugs in the bathrooms are crystal here. The Grand Salon has the proportions and  magnificence of the Versailles Hall of Mirrors. The Petit Salon is bejewelled with emerald velvet sofas, even the swimming pool echoes a fin de siecle ballroom. There are  walls of pleated satin, marble tables and parquet floors. Throughout the fifty storey tower, prisms of sunlight burst through the floor to ceiling crystal panelled windows, refracting into rainbows with spellbinding effect. 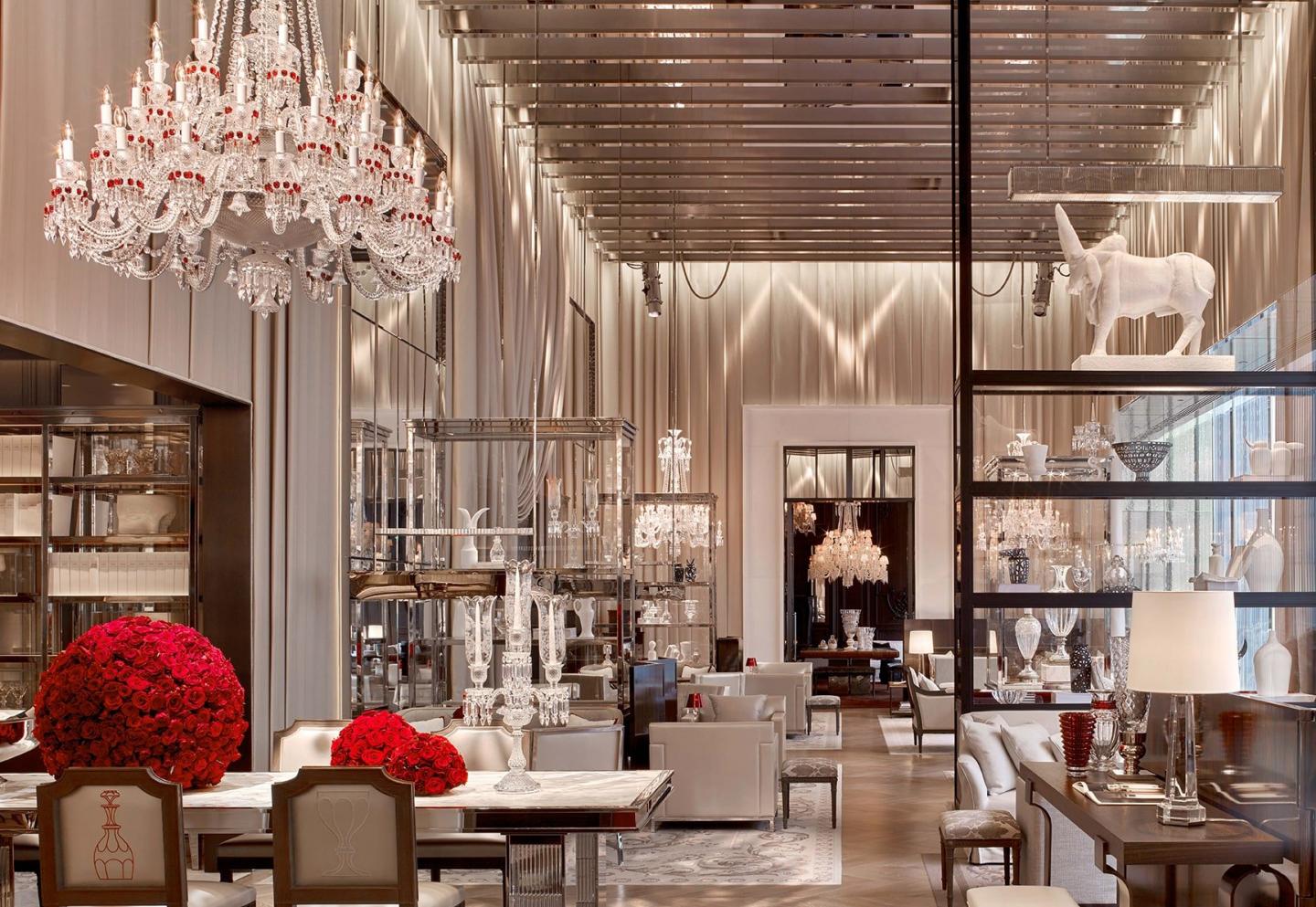 The interior style speaks a  contemporary New York aesthetic but with a distinctive French accent. One hundred and fourteen elegant rooms and twenty-six suites over seventeen floors are enclosed in peaceful dove white walls, but pierced with a shot of dangerous deep red. Every translucent chandelier has at least one red crystal containing fourteen carat gold, a Marie Antoniette parting kiss. There are stately canopy beds with bespoke jacquard bedding and even a pillow menu.

Today there are fourteen thousand French expats living in the new ‘Little France’ in Brooklyn. You will find them eating  at Lafayette, the all-day brasserie with a patisserie; La Sirene,  the intimate southern bistro that seats only Twenty-five. Balthazar, in Spring Street is a favourite with New Yorkers, who are increasingly adopting la vie en rose lifestyle. In a midtown house off 5th Avenue, La Grenouille cooks ageless French specialities like lobster bisque. It is an impressionist fin de siècle nostalgia trip. Harlem also has a fascinating upbeat french community to explore, with exciting African French flavours and sounds. The influence of French culture is moving apace, well beyond the spheres of food and fashion.

You may return from the flagship French designer shopping, dressed like the Macrons in top to toe Yves Saint Lauren, swinging your new Louis Vuitton bag with a certain je ne sais quoi, having spent your entire bonus on silk lingerie. But you still  have your Baccarat bath to look forward to, with a panoramic view of Central Park . Simply press the in-room champagne-ordering button, and, with crystal stemware in hand, you can anoint yourself in perfumed water as the 21st century Sun King, the Emperess of your own private palace. Bathing in this Parisian indulgence is not extravagance for its own sake, you understand. You are playing your vital part in elevating French culture. Faites votre devoir!