Rome has more historic treasures than anywhere else in the world; 400 fountains, 900 sacred monuments and 574 archeological sites; a monumental legacy of ruins for the artistic contemplation of life, death and decay, the rise and fall of empires. The Eternal City has had a hold over the human imagination for centuries. It has defined aesthetes, painters and poets. In the eighteenth and nineteenth centuries Rome became the ‘Paradise of the Exiles’. The English Romantic poets, Keats, Byron and Shelley, escaped here to immerse themselves in the holy grail of antiquity. Walk in their footsteps and you will discover the unique way they illuminated the world.

The Spanish Steps, the grandest staircase, was at the heart of the English Romantics’ Rome, an area that came to be known as the ‘English Ghetto’. The cascading 135 step stairway, designed in the early 18th century to link the Piazza di Spagna with the Piazza Trinità dei Monti, became a great plein-air living room for scores of English travellers, the final crescendo of their Grand Tour.

At the foot of the steps, in Piazza di Spagna, is the building where Keats lived in the second floor apartment. Keats breathed his final breath here in 1821. He was only twenty five and at the peak of his creativity. Keats knowledge of his impending death drove his creative process, it was the triumph of his genius.

The  Keats-Shelley House, now a museum and library, is the English Romantic’s Cor Cordium. You can breathe in Keats’ atmosphere and captivating views , which have hardly changed, by staying in an identical apartment upstairs, courtesy of The Landmark Trust. 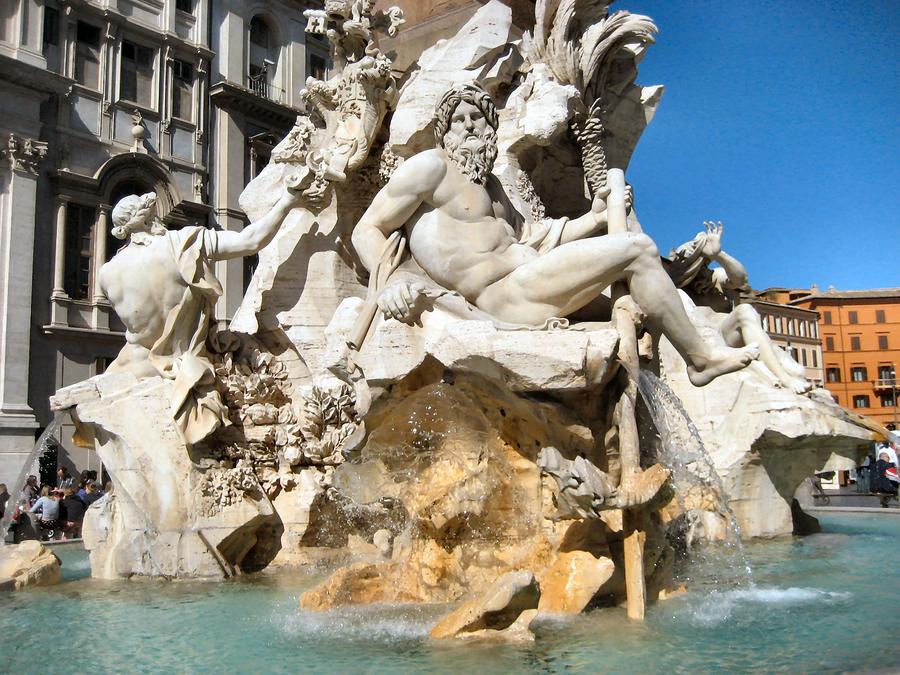 Just outside the front door, The Bernini fountain, the Barcaccia, is a stone boat sinking into the Piazza di Spagna. It was built to commemorate the spot where the river Tiber reached its highest level, leaving a river barque washed up in the square in the historic flood of 1598.On his deathbed, Keats listened to the sound of the water flowing from the fountain just outside his window. It reminded him of lines from the 17th-century play ‘Philaster’; “All your better deeds shall be in water writ, but this in marble”. Keats didn’t want his name on his tombstone, just the words: “Here lies one whose name was writ in water.”

Keats grave is at the New Protestant Cemetary, along with the remains of Percy Bysshe Shelley, who was just twenty-nine when he drowned in a storm in the Bay of Lerici, only a year later. A book of John Keats’ poems was found in his pocket. The poet was cremated, but for some mysterious reason, his heart didn’t burn. Mary Shelley kept his heart in a silken shroud. A year after she died, it was found wrapped in the pages of one of his last poems, Adonais, an elegy on the death of Keats.

Lord Byron’s passion for Rome is reflected in his poem ‘Childe Harold’s Pilgrimmage’.
“Oh Rome! my country! city of the soul!
The orphans of the heart must turn to thee!”…

Byron and his friends drank their coffee in the Antico Caffe Greco on Via dei Condotti. It is there you might find a contemporary English Romantic poet sitting alone with a coffee and a copy of La Repubblica. His work has been compared to that of Byron himself; Morrisey moved to the English Ghetto in 2005 and recorded ‘Ringleader of the Tormenters’ at Ennio Morricone’s Forum Studios in Piazza Euclide. He was poignantly photographed on the Spanish Steps and in Piazza Cavour, which inspired his lyrics for the track ‘You Have Killed Me’. 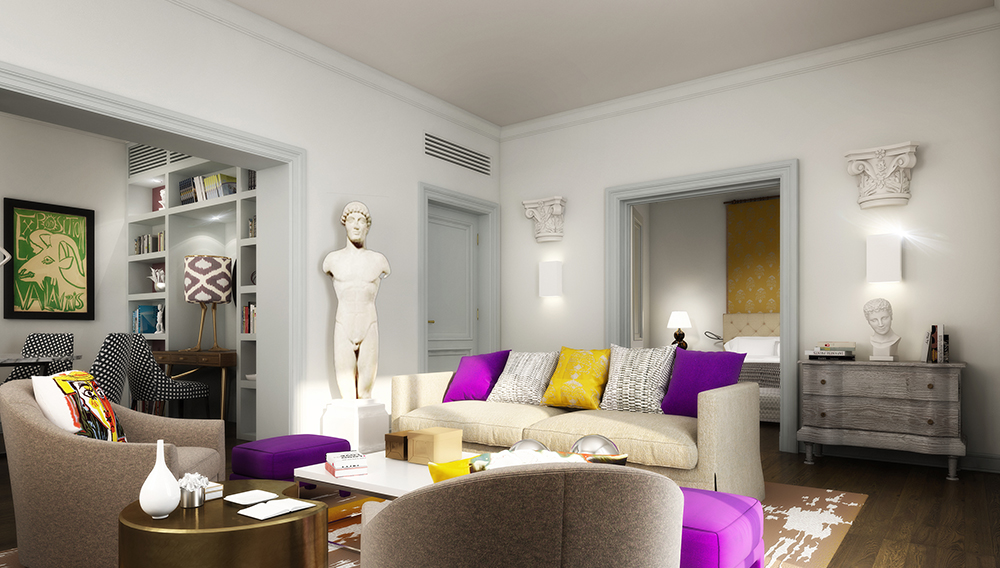 Morrissey lived in Grand Tourist style in a suite at the luxury Hotel de Russie between the Spanish Steps and Piazza del Popolo, on the Via del Babuino. The hotel has a secret garden and one of Rome’s best spas, an indulgent, contemporary, Roman baths.

Morrissey has recorded his latest album (release date 17th November) ‘Low in High School’ in Rome, returning to old English Romantic haunts (as well as streetcred Pizzeria La Montecarlo). The lyrics of tracks such as ‘I spent the Day in Bed’ , ‘I Wish You Lonely’, ‘Home is a Question Mark’ , suggest that the ruins of Rome have brought him under their spell once again.

Today the crumbling city of Rome is weighed down by crippling debt, comparable to the financial crisis that lead to the fall of the Roman Empire. The municipality is on its knees. There are not enough funds to run public services, let alone the restoration of its priceless decaying antiquities.

The big Italian fashion houses immediately stepped in after an appeal for funds. In return they benefitted from some privileged access and big Italian ‘Art Bonus’ tax breaks. Bulgari has just spent over a million euros for restoration work on the Spanish Steps. Fendi paid 2.5 million for the Trevi Fountain. Byron may have approved of the recent actions of artist activist, Graziano Cecchini, who stained the fountain water with blood red dye in protest at Rome’s “corruption and filth”. It was, he said, a “cry that Rome isn’t dead, that it’s alive and ready to return to be the capital of art, life and Renaissance.”

Although the Italian government committed a billion euros towards conservation of its heritage, the scale of restoration work that still needs to be done is mind blowing; the tomb of Augustus (“I found Rome a city of bricks and left it a city of marble.”) alone will require 10 million euros.

Rome’s cultural heritage is our inheritance to preserve. Yet even the modest Keats-Shelley Museum clings to survival, like its protagonists. English Romantics, wherever you are, please dig deep! It is our turn to help our Friends, Romans, Countrymen to rise above all troubles and circumstances! As we contemplate how to best uphold the crumbling city that inspired our greatest art, poetry and literature, we might take heed of a little book that is the work of diehard English Romantic, Christopher Woodward. He has walked the length of the Appenines and swum the Hellespoint in a quest to find inspiring ruins.

Woodward wrote ‘In Ruins’ as a pocket companion for all contemporary Grand Tourists. A literary jewel, it pays homage to ruins and their effect on the human spirit. It would be a fitting gift for all of Rome’s archeologists and conservators today.Woodward’s sentiment for Rome resonates with a distinctly English Romantic ardour. He describes how Shelley composed ‘Prometheus Unbound’ at the overgrown ruins of the Baths of Caracalla. If the poet was writing there today, he argues, he would not find such inspiration, because archaeologists have killed the romance of the site. Now it has tarmac paths, it has been sprayed with weed killer and the site covered with ‘keep off the grass’ signs, nothing short of a Roman tragedy. For a ruin to wield its power over the imagination, and inspire great art, man’s interfering hand must be restrained. Woodward’s message is clear; be careful not to ruin the ruins; beauty, love amd poetry must prevail!

Recently, the luxury leather retailer Tod’s paid 25 million euros for the first phase of the restoration of the Collosseum, under the logo “Tod’s for Colloseum”. One can only hope that the 242  species of wild flora growing spontaneously upon the ruins, which have been meticulously recorded over four centuries, are to be protected. That would honour nature, the iconic ediface and the art that it has inspired throughout its history.